A Simple but Effective Guide to Make Your Dog Stop Biting

A Simple but Effective Guide to Make Your Dog Stop Biting

Dogs and puppies have a natural tendency to bite and chew. They usually also prefer interacting with objects with their teeth rather than their paws.

While this “natural” behavior can seem cute at the beginning, especially if you have a puppy or the “bites” are still very gentle, it may eventually grow to a point where it becomes a serious problem. And this is precisely why you need to act before things get that worse. You will also be much better off starting early, as the process will be a lot easier and smoother than when biting becomes an almost irrevocable part of your dog’s behavior.

With that said, let’s cut to the chase and take a look at few simple but highly effective ways of making your dog or puppy give up on its biting habit for good.

When two dogs play, they tend to mouth each other; but there’s nothing unusual about it. It’s a common part of their playing activity.

However, whenever one of them ends up biting the other, the dog getting bitten would yelp, making the biting dog realize that it has done something wrong. And over time, a dog would probably easily be able to understand that whenever they bite another dog and it yelps, it’s likely because it has been hurt by their bite.

This realization and understanding that your dog may already be having somewhere stored in his memory is something you can use to your advantage here. Sure, it doesn’t know that it needs to think in the 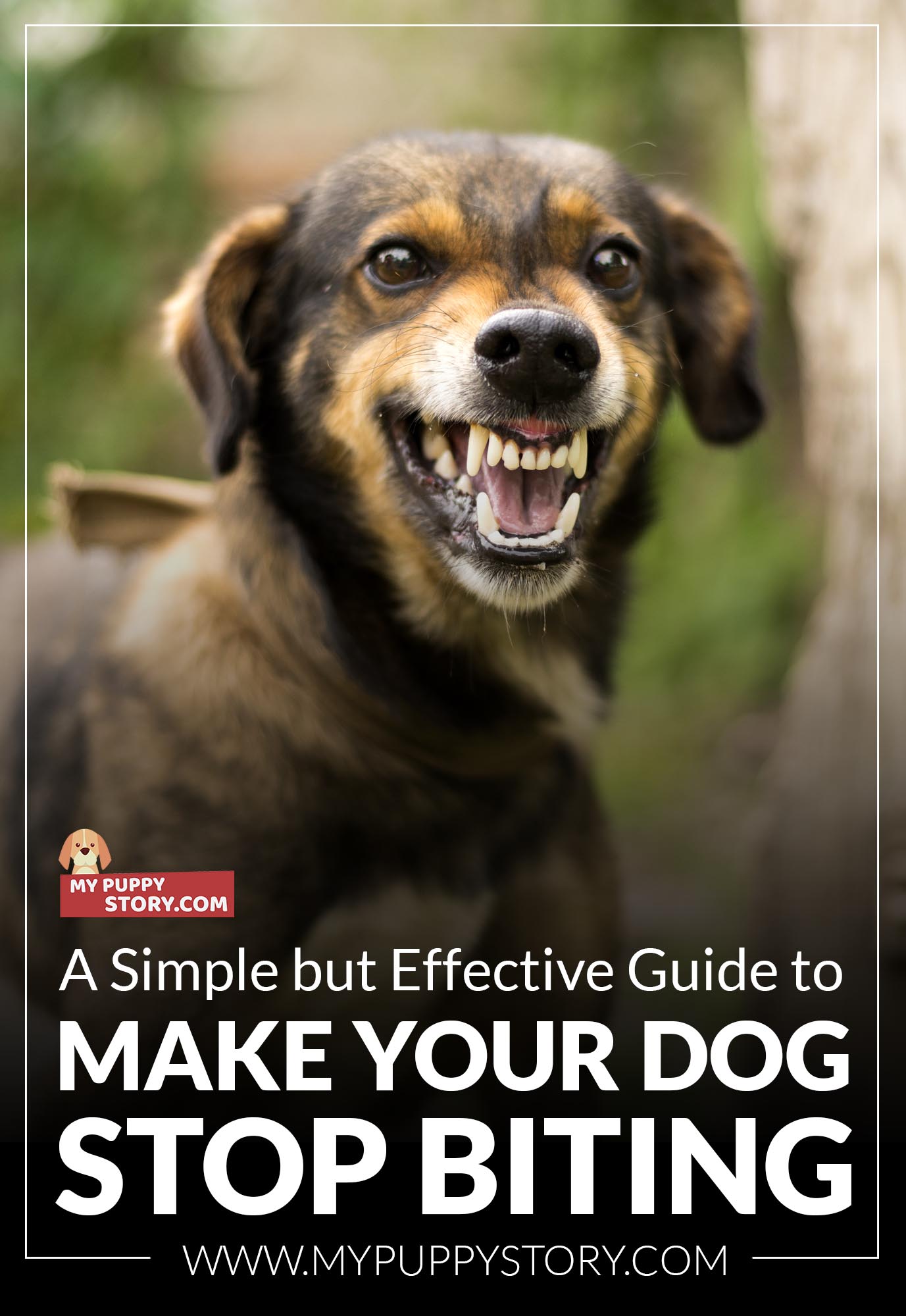 same way while playing with a human, but making your dog learn that certainly wouldn’t turn out to be an extremely difficult task.

Whenever your dog ends up biting you, you should make your hand go limp, while also making a yelping sound. However, you should be careful not to take your hand off his mouth in a sudden manner, as it may make him think that you’re just playing with him and that he’s simply supposed to chase your hand.

If the yelping doesn’t work for you, you can resort to a loud sound that helps you express your “pain.” Be careful not to frighten your dog, though; but if you do, you should take your cries of pain down a notch.

After performing these actions, you should also be ignoring your pet for about half a minute before going back to playing with him. Similarly, you wouldn’t want to repeat this process more than twice in fifteen minutes. But if you feel the need to do so, you should simply be having a time out.

This will help the dog understand that while gentle play can go on for long, rough play will make you stop playing with him far more quickly.

Teaching your dog what is okay to chew and what is not can go a long way in making him give up his habit of biting people. To do this, you would need a few good, tempting chewing dog toys to begin with.

Whenever the dog tries to go for your hand or any other part of your body, just dodge his “attack” and throw a chewing toy his way. If he ends up satisfying his thirst for chewing using the toy, praise him and give him a good treat. Make sure the dog knows that he will be rewarded with a treat if he goes with the appropriate chewing option as soon as you give him a chewing toy to engage himself with.

Another way of satisfying your dog’s chewing desires is to play a game such as tug-of-war with him. However, you must be careful not to let the aggression in him come out while playing. In order to use this method effectively, you would want to teach your dog commands such as “leave it” or “let go.”

Dogs tend to have a habit of not only mouthing people, but also other things in their environment. And to prevent your dog from following this typical dog behavior, you should have a few interesting things handy that will grab his attention away from the other things in his environment that he finds very tempting to chew.

Chew toys are obviously a great option, but those “treat” toys that force dogs into doing some serious thinking to get the treat can really keep them engaged as well.

Some dogs develop a habit of biting at people’s feet or ankles. This is something you’re very likely to come across if you own a large, herding dog.

A good way to deal with this is to have a chew toy in your pocket when you’re at the home with your dog. Whenever he comes after your ankles or feet, you need to stop moving completely and wave the chew toy around and make him go for it instead. When he does, you can also reward him with a treat.

Even if you don’t have a chew toy with you when your dog bites you, you can simply stop moving. When the dog finally takes his teeth off your feet, praise him and offer him a treat or toy. This is simply a way to encourage his positive action.