Goldens were originally bred for the purpose of being biddable, as well as very calm and sensible, for using them as hunting dogs. These popular dogs excel in obedience competitions and as show dogs, as well as for tracking and service. In fact, several organizations train Goldens, Labs, and Lab-Golden mixes almost exclusively, including Paws With a Cause, Canine Companions for Independence, and Assistance Dog International.

Their patient nature makes Goldens the perfect family dog as well. They’re great with kids and enjoy spreading their love around the entire family. They may not be your best choice if you’re looking for a guard dog, however, since they basically love everybody.

They do need plenty of good healthy exercise for avoiding weight gain and boredom. Exercise also helps them with maintaining their rather large frames. So, to keep them in good condition, Goldens require one or more long brisk walks, runs, or jogs every day. And, since they are, after all, retrievers, games of fetch are one of their favorite exercises, however, they also love swimming as well.

Golden Retrievers are consistently ranked among the top five dogs in the United States for popularity. There are numerous very good reasons why that is, including: 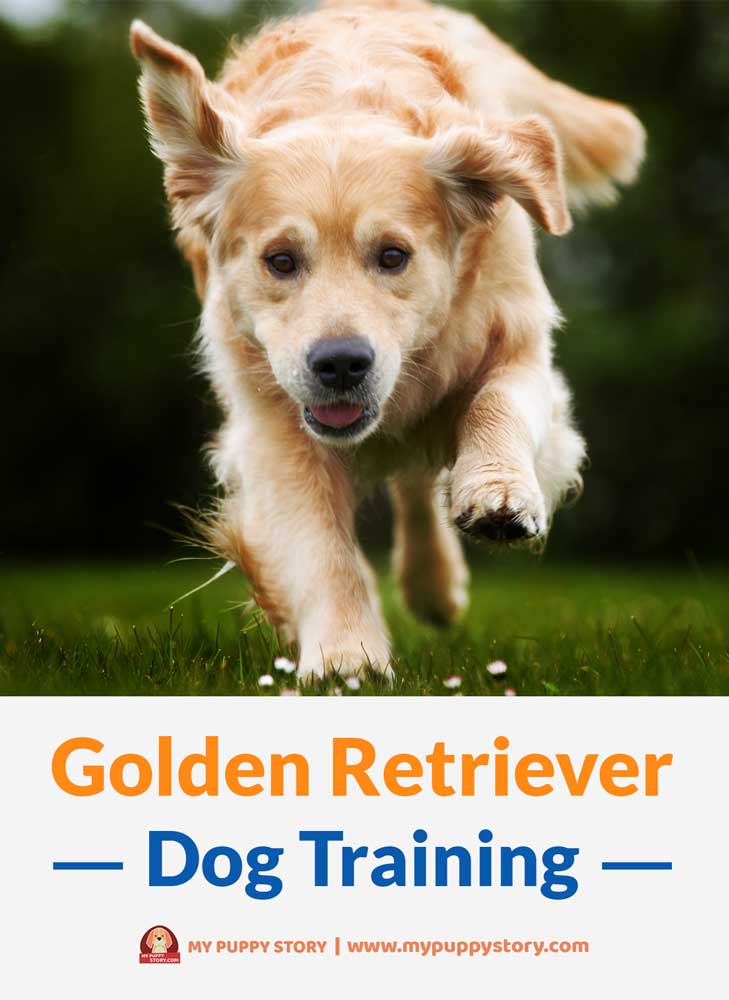 With all of these positive attributes and impressive history, it’s easy to see why Golden Retrievers are so eager to please and easy to train. And, training for these beautiful animals is a very important part of their lives. Goldens should definitely have some important basic behavior training. This includes learning the proper response to verbal commands like “drop it”, “down, stay”, and “come”.

Your Golden especially needs training for properly and reliably responding to those three commands, since they can be used for averting disaster. In fact, any one of them could end up saving your beloved Golden’s life at some point. Training sessions with your Golden should always be fun for you both, involving only positive reinforcement of the kind of behavior that you want your dog to exhibit. In addition, all training sessions should always have a positive ending. Safety and a long happy life are, of course, your main goals with your Golden but good behavior and reliable actions from him are some of the additional benefits of dog training.

The fact is that positive reinforcement could involve a number of things, such as social rewards, treats, or toys. Research has found, however, the answer to the question of whether they prefer food or praise, the majority of dogs preferred either their owner’s praise over food or liked them both equally.

The best case scenario is that your Golden is successful at learning to quickly and reliably respond to your commands each and every time no matter where you both may be and regardless of whatever is happening around you. Before getting started with the actual training, start first with one simple word to remember and that word is “fun”.

The key to this type of training is making sure that your Golden really wants to perform the behavior involved rather than feeling that he or she is forced to do it. Therefore, using anything that will get your dog willingly into the game of positive reinforcement behavior training is great. You always want to make it appear that you and your Golden are about to be having lots of fun. You can do this by using treats and toys, as well as playful body language and a soothing playful voice.

Learn How to Apply Positive Training for Puppies

The “come” command, aka the recall command, may seem simple but it can be one that is a bit challenging when you’re trying to teach it to your Golden. This is because you should only be using this command if something good will be happening to your Golden when he or she responds to the command, not if you plan to scold or do anything else that your dog won’t find enjoyable. In the event that your Golden is already aware that a scolding is at the other end of that “come” command, then you’ll have to change your recall command to something else, like “now” or “here”.

It’s also very important to use a tone of voice that is cheerful whenever you call your Golden. In a dangerous or frightening situation, keeping your voice sounding sunny and cheerful can be very difficult but also very important. Even if your dog is getting ready to bolt out your front door toward the street, it’s crucial that you don’t convey any anger or panic, because it could discourage his or her return.

Knowing when you shouldn’t use a recall command is as important as knowing when you should since your overall goal should be giving your Golden plenty of opportunities for succeeding at coming when he or she is called. However, during the learning process, giving your dog a recall command during a fun activity can lead to a response that probably isn’t what you want.

In any situation where it’s possible that your Golden may not come when called, it’s crucial that you don’t provide an opportunity for him to fail. Just go to him calmly and snap the leash to his collar. In addition, it’s important to bear in mind that some dogs have a tendency to block everything out while having great fun sniffing the great outdoors. So, until the time comes that your Golden reliably responds to the recall command, never assume that he’ll come when called if he’s off-leash. Better safe than sorry, so keep him on a leash until you are completely sure that he will respond to your recall command no matter what.

The Drop It Command

Most dog-owners know the importance of training your dog to drop it on command. Since they use their mouths and noses for exploring everything in the world, naturally some of those items that they pick up could easily end up being hazardous to their health. Consequently, learning to drop it is crucial. In addition, it can really be beneficial when you’re playing fetch, as well as some other games. Let’s face it, it can be a heck of a lot simpler and less messy to pick up your dog’s favorite slimy tennis ball off the grass than having to be wrestling it from his mouth all the time. The drop it command can easily be learned but only if it’s taught correctly. So, what you want to do is offer your pet a trade. You’re trading the item that he has in his mouth for a treat that you have in your hand.

Here are the basic steps involved in teaching the drop it command to your Golden:

While he has it in his mouth, hold a treat in front of his nose. Then, give him the treat when he drops the toy.

Repeat as often as necessary until he responds reliably.

Now, hold a treat close to his nose while clearly and convincingly adding the verbal drop it command.

Following a few repetitions, hold the treat in front of his nose, gradually increasing the distance when he responds to the command.

Follow all of this up by using the command without a treat, praising him when he drops the toy.

Let’s say your Golden runs out your front door and then is lucky enough to make it across the street in one piece. If you were to give him a come command, it would cause him to run back into traffic to obey you. That’s when the down/stay command is such a critical part of your dog’s learning. He’ll respond immediately to your down/stay command and then you can run to him, snapping his leash on his collar and bringing him back to safety. In addition, this is a must-have command when you have a big friendly dog who loves greeting everybody by happily jumping on them.

Here are the basic steps for teaching this command:

When to Start Training Your Golden

It’s a fact that puppies are well-known for their short attention spans. However, they can start learning obedience commands that are pretty simple when they’re only seven to eight weeks old. By simple, that means “sit”, “stay”, and “down”. Beyond that, the more formal training shouldn’t really be started until your Golden pup is six months old, at which time he should be more ready for it than when he’s younger.

Your Golden is inclined to want to follow the pack leader and, guess what? That’s you. They can sense your level of confidence and, if it’s low, they’ll just take over and control you instead of the other way around. This can lead to some bad behavioral issues, including but not limited to chewing, anxiety, leash-pulling, and excessive barking. So, be the pack leader and show your leadership qualities at all times with your dog. Gentle but firm all the way is the key to training your Golden.

Being an effective pack leader shouldn’t just start when your Golden reaches six months of age nor should it begin when he behaves badly. It needs to be consistent for his whole life and especially during his dog training. So, ensure that your Golden puppy grows into a healthy and well-balanced adult by showing him your leadership skills right from the start of his dog training.

Your Golden Retriever Puppy Month by Month provides new pet owners with everything you need to know and do at each stage of development to make sure your playful, energetic puppy grows into a happy, healthy, and well-adjusted companion. A veterinarian, a trainer, and a breeder team up to cover all the questions new owners tend to have, and many they don’t think to ask, including… 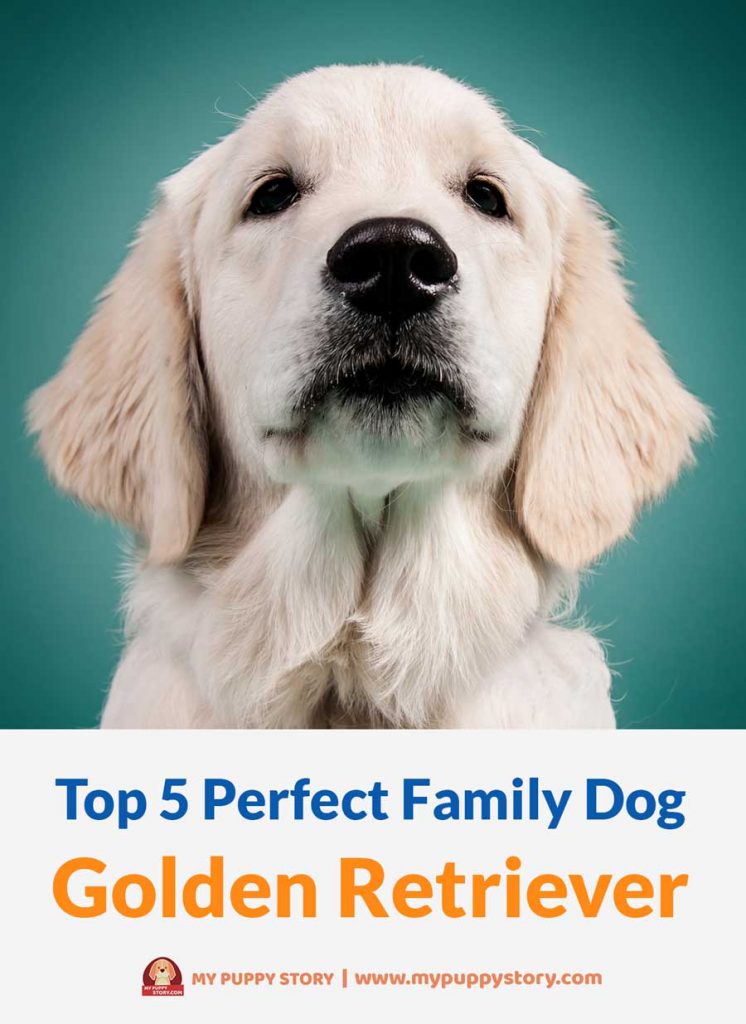